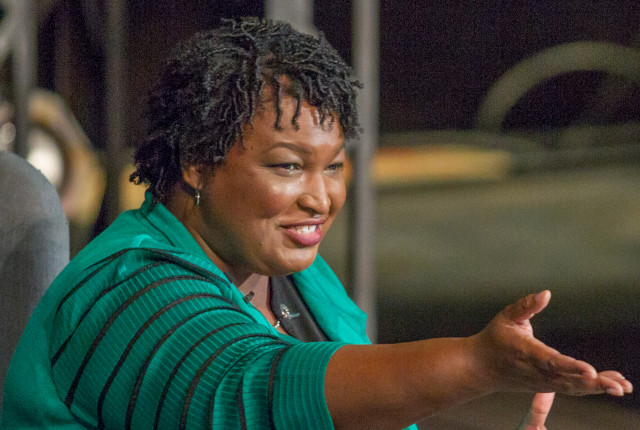 (Republican Party News) – Radical leftist Stacey Abrams could have played a major part in the fraud that took place in the state of Georgia during the 2020 election.

According to reports by the Gateway Pundit, Abrams firm “NowAccount” is likely behind the hiring of some very suspect individuals who are now being reported on.

TGP previously reported on how Abrams actually profited from the 2020 elections but now it appears that she had the means and the ability to influence who was being hired by “Happy Faces” to work the election.

I found this March 2018 AJC [Atlanta Journal-Constitution] article on Stacey Abrams and a company she co-founded called NowAccount. NowAccount secures companies’ debts who have government contracts. Abrams owns 16%. Now, isn’t it interesting that NowAccount is registered as the only secured party provider for Happy Faces? NowAccount provides the line of credit.

With Stacey Abrams behind the financing of Happy Faces it seems reasonable to ask whether or not she was influencing who was getting hired to work the elections in Georgia.

CD Media reported on some of the suspicious criminal activity that took place in Georgia during the election.

According to the outlet, they spoke with Fulton County resident Barbara Hartman regarding her experience as a poll watcher during the election and subsequent hand recount.

Hartman has many years of experience working as an assistant manager and around 25 years as a manager of elections in Fulton County.

After serving as a poll worker during the 2020 election, she filed an affidavit saying that she personally saw mailed-in absentee ballots that had not been folded. This is just not possible considering that the mail-in ballots are supposed to be folded and placed in an inner secrecy envelope and then that envelope is placed in an outer mailing envelope.

There’s just no way these mail-in ballots would be free of folds.

CD Media reported that all of the election workers they covered were Happy Faces employees and “were not being monitored during voting, poll closeout, or ballot and flash card transport to the World Congress Center by any Fulton County Election official or Public Safety official.”

There is clearly a connection between those hired to work the 2020 election in Georgia and the leftist activist Stacey Abrams. It would certainly appear as though an investigation should be started into the hiring and training of the election workers in Atlanta, at the very least.

Something is just not right and it’s most definitely concerning to think Stacey Abrams, of all people, could have been installing operatives into the election process in the state.

This would be a prime example of widespread fraud, you know, the kind that Democrats have vehemently insisted did not exist during the 2020 election.

It’s clear that the stealing of the presidential election was a coordinated effort on many fronts and Stacey Abrams seems to be at the center of it all.