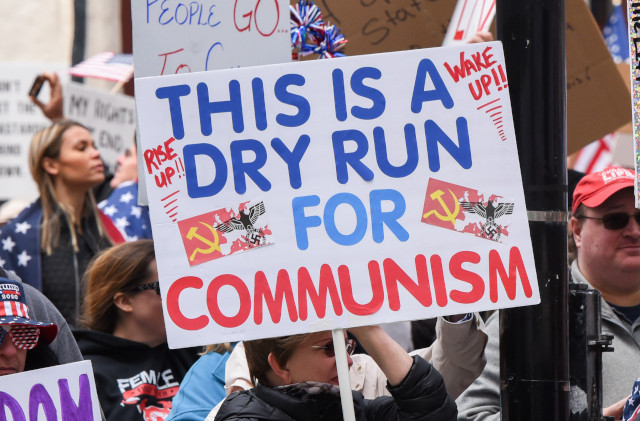 (Republican Party News) – It seems that ever since taking office, Joe Biden has made repeated attempts to make himself the role of dictator here in the United States, having issued a slew of executive orders he was hoping would take our beautiful and free country and transform it into whatever nightmare he has concocted in his pudding brain.

Just look at the COVID mandates, the crisis at the border, the increasing inflation, the federal election takeover, massive spending. These are all things he has demanded to have, simply because he wants these things, not because they are what is best for the country and its people.

However, according to WND, there’s a lawmaker in one state who believes that Biden has gone way too far and is now calling for a vote from the people of his state on whether or not they should declare independence from the Union.

The plan in question comes from Rep. Mike Sylvia, a Republican from Belmont, New Hampshire.

Sylvia has stated that he’s already filed for a proposed constitutional amendment that would ask voters in the state during the 2022 midterm elections whether or not they were in favor of breaking off ties with Washington, D.C., and become a separate nation-state.

“There are hundreds of examples of the federal government overstepping its authority,” he went on to say in an interview. “Enough is enough. We should put this before the voters to decide.”

Yes, this would mean that New Hampshire would end up losing all of its federal funding, Sylvia said, but residents would then be exempt from paying federal income taxes. That’s a major plus I’d say.

“We are a donor state that pays out more in federal income taxes than what we get back,” Sylvia stated.

The proposal he came up with says, “New Hampshire peaceably declares independence from the United States and immediately proceeds as a sovereign nation. All other references to the United States in this constitution, state statutes, and regulations are nullified.”

While this plan has been proposed, the publication said that it’s a “long shot” for it to be approved in time for the next legislature, which begins in January of 2022.

In order to get on the ballot, the measure needs to have 60 percent approval from the House and Senate, which are both in GOP hands.

“Their ancestors made the decision to join the union 240 years ago, in a different world, one in which the federal government did not violate our every right, and did not steal half of our money to fund their tyranny,” a backing group known as Liberty Block went on to explain.

Some of the reasons cited for leaving the Union include “corona-fascism” along with “anti-gun laws.”

Keep in mind that New Hampshire isn’t the first state in the Union to consider secession from the country. In fact, Texas, California, and Utah have also had similar movements, though they have not managed to gain significant support.

“The people of America have forgotten their history, if we take the time to look at our roots we can see that our constitutions have received ‘lip service’ for far too long. While I cannot change the direction of the federal government, I can hold up the New Hampshire constitution and demand that we honor its clear directives. Article 10 reads in part, ‘whenever the ends of government are perverted, and public liberty manifestly endangered, and all other means of redress are ineffectual, the people may, and of right ought to reform the old, or establish a new government,'” Sylvia wrote over at the FreeKeene blog.

Regardless of whether or not it passes or happens, this should send a powerful message to this president. We’re not going to take tyranny laying down. A lot of Americans have become comfortable with the status quo. That’s the way it’s always been. But others will do everything possible to politically fight back against big government through legal and peaceful means.

We’re blessed to have a system that allows for such.